As previously discussed, Americans love to use a foreign word and to pronounce it in as foreign a way of possible. Like the way they pronounce envoy 'on-voy'. Maybe it's because they are a nation of immigrants. Maybe it's because they have a New World inferiority complex, albeit thinly masked with virulent patriotism. As a rule if it sounds a bit Euro it sounds a bit classier. Not my rule, theirs.

The melting pot culture of this nation of immigrants gives them license to adopt words from wherever they choose and with no consistency. Hence the adoption of French 'bleu' cheese, and the use of endive (instead of chicory). They went with the Italian zucchini instead of courgette, and Spanish cilantro for coriander. So far, so confusing but its their prerogative to appropriate as they wish. And for the most part we can all navigate and translate our way around the ragbag.

My theory is that the Ahmanson Theatre and the Center Theatre Group spell themselves the British way  to distinguish their productions from those low brow, populist ones in other theaters. Although they're fine being associated with a standard American Center. 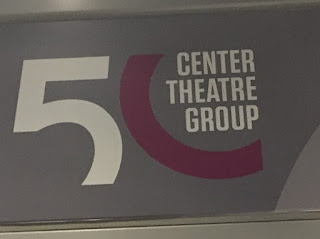 If they're not careful, people will just think they are misspelling it.

A visit from P's Godfather

There are no prizes, no winners and no losers. I am always grateful to have time with family and old friends. TLOML is always glad of an excuse to fix someone an old fashioned. And P always welcomes extra storytellers and puzzle makers.

That said... perhaps special mention should go to the guest who, after his ten hour flight from Tokyo, was at the gym with me within half an hour of arriving. Who provided the perfect reason to dodge work and visit LACMA for a couple of hours, and to spend Saturday night at the Hollywood Bowl singing along to Grease (because let's face it, great though that venue is, you do need an extra push to face the schlep up there). And aside from the excellent LA cultural jaunts, just fit right into my workout, taco and beach routine for ten days. 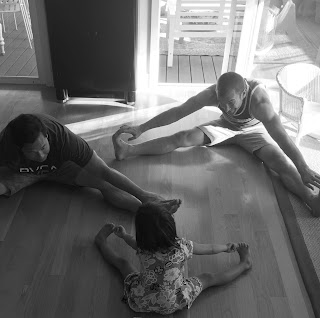 Best of all - as well as reading her endless stories, he willingly joined P's yoga session.

We are now bereft of guests for the rest of the month, before we head to the UK to be someone else's guests for a couple of weeks. But when we get back we have two families visiting in quick succession. I don't think they'll quite share P's Godfather's commitment to Crossfit Horsepower. But hopefully they'll catalyze some good sightseeing (I've STILL never been to Griffith Park) balanced by plenty of lazy afternoons at the beach.
1 comment:

Nailing the Fourth of July

I love the Fourth of July. It took me a while to get used to the flagrant patriotism. I know that's the point of the Fourth of July, but the sheer volume of stars and stripes still surprised me. I'm from a generation of Brits who are raised to be slightly embarrassed about our nation's past. With the exception of skinheads and everyone during a world cup, we don't fly our flag quite proudly.

But if the idea of a day of national pride and the preponderance of patriotic outfits took me aback at first, it didn't take long before I was decking P out in red white and blue and asking friends what they were doing for the Fourth.

Having said all that, this year we didn't quite join the party. The last couple of years we went to a workout buddy's massive beach party, but he switched gyms, and now I haven't seen him since the last Fourth of July, so the ratio of catching up with him vs making small talk with hardbodies I don't know from Adam is all out of whack. We could have joined our good friends' block party, for a more wholesome option. That'd  be fun, but it's not our block and our neighbours, after all. We could have gone to a party in Silverlake, but who wants to drive for an hour on the Fourth of July?

It turns out we didn't want, or need to drive anywhere.

Instead we made the most of a day off in the middle of the week the best way we know how. An early surf for TLOML, and a run for me, and then we wore our smuggest smiles down to the beach. It was crazy busy but we found a quiet patch with space for P to dig in the sand while we did very little. 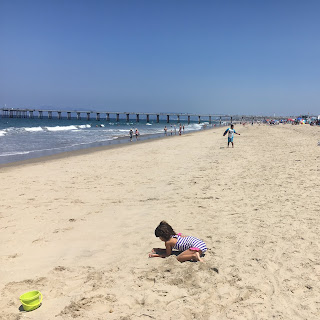 TLOML body surfed for ages, and not to be outdone, I took my first - very brief - ocean swim of the year.  P collected about a hundred shells. We enjoyed some late afternoon margaritas and burgers on our deck with a couple of friends, and fell into bed feeling sun kissed and tipsy by 10pm.

It's no pool party, but I think we may have found the perfect way to celebrate America's birthday.
3 comments:

The cold comfort of being an expat

I'm a Green Card holder, aka a resident alien, that is to say I'm unable to vote or serve on a jury. I believe I now qualify to apply for citizenship but frankly I'm in no great rush.

There have been plenty of times when I've enjoyed being able to shrug and declare 'I'm not a citizen, it's nothing to do with me'. November 9, 2016 is a good example. A few months earlier I found that distance from home softened the blow of the tragedy that is Brexit. I was fairly active, politically, before I became transatlantic. Not just voting, but displaying posters, joining marches and protests and just generally being one of those talkative, self-righteous left wingers that will save the world one day if you'd all only let us.

Then came the luxury of shrugging and saying 'it's nothing to do with me'. The luxury of opting out of difficult conversations with family members who have different points of view. The strange experience of watching an election in the country where I live as if it was happening in a parallel universe - I've never not voted in an election before, large or small. I'm a bystander. I can still march for gun control, donate to Planned Parenthood and ACLU, and wear my 'Nevertheless she persisted' t-shirt. I can exercise my consumer power. But that's about it.

I'm ashamed to admit that I enjoyed knowing that what I think - about, say, gun control, a woman's right to reproductive choice, or the inhuman 'zero tolerance' policy that is ripping infants from their parents at the border - doesn't count in the country where I live. It's an easy way out when you live in a country where - to quote this Guardian column - 'kids get bulletproof shields for their backpacks as a gift for graduating middle school'.

But it's cold comfort. And as I drove to pick P up from pre-school today (she's safe - no school shootings in Los Angeles since May 11, in case you wondered) I listened to a story about the border separations on KCRW. That's our local NPR station, the bleeding heart liberal's station of choice. And my heart did bleed. I was moved to tears by this harrowing 7 minute recording of inconsolable kids - little, little children, the same age as P - crying for their parents. It's a horrible inhuman exercise, being carried out by a frighteningly authoritarian administration, and I can't vote them out. I can't even, really, make those phone calls we're supposed to make to our Senator - to tell them 'You represent me and I support the 'Keep Families Together Act' (Americans - if you're reading this and feel the same way - call 202-224-3121 and tell them you support SB3036). 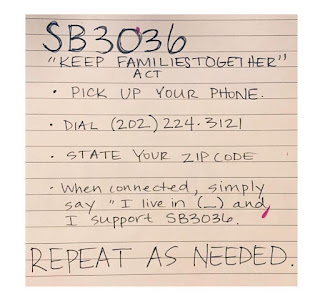 I mean, I can make that call and I did, but I think they can tell by my accent I'm not an American - and I hope they don't check the voters roll because then they'll know they don't represent me at all.

Calling Kamala Harris and asking her to support the 'Keep Families Together' Act is redundant. Voting for progressive, liberal policies in California, is like wishing for sunshine in LA. There's really no need. But being unenfranchised (I figure I can't say 'disenfranchised' sine no-one took it away from me...) is untenable. And since we aren't planning on leaving any time soon, I may just have to bite the bullet (get it?) and pursue the path to citizenship. With a heavy heart.
2 comments:

We went to a backdoor wedding recently. No, wait, I don't mean that. I mean a backyard wedding. But that name has sort of stuck for me. When chatting to a British friend, she tongue twisted it into a backdoor wedding, because frankly it's not the sort of phrase Brits get to say very often. First of all we don't have backyards, we have gardens. But more to the point, we don't get married in our backyards or gardens or indeed anywhere other than a place licensed according to the Marriage and Civil Partnerships Regulations.

The Brits are missing out, because a backyard wedding is a lovely thing. Informal, intimate, purely focussed on the two people and their vows, surrounded by friends and family - oh, and maybe a Dudeist priest. TLOML is ordained by the Church of the Big Lebowski and in that capacity can conduct legally binding wedding ceremonies. For real.

It wouldn't happen in England, that's for sure. There, only a minister or a proper, registered registrar can marry a couple.

One of the many lovely things about this backyard wedding was how relaxed it was. We hung out, drinking wine and chatting, until the couple were ready to say their vows, at which point we gathered to watch them exchange vows under a charming chuppah on the lawn. 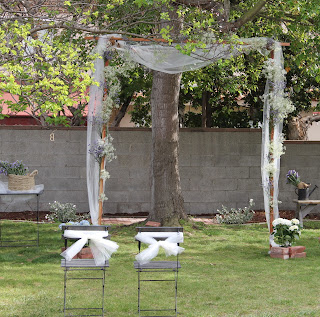 That also wouldn't happen in England. First of all, there'd be no alcohol in sight. No alcohol or food may be consumed in the room where the ceremony is to take place, for an hour before the ceremony. Not sure if they are afraid of people getting wed without their senses about them, or just crumbs spoiling the vibe or what.

You also can't get married outside, as you need to be wed within a permanent structure. My BFF got married under a cool little gazebo, with guests sitting outside, which was a creative and charming solution. But gazebos that have been recognized by the Home Office are few and far between. And so, as a result, are backyard weddings.

Which is a shame. It was no St George's Chapel, but this backyard ceremony was truly one of the loveliest, most heartfelt and honest weddings I've ever been to.

Isadora Watts
Los Angeles - London - New York - Yorkshire
Transplanted to Los Angeles and then New York by The Love Of My Life (we’ll call him TLOML) - till I dragged him back to Britain. Writing about the cultural chasm, and our return to LA as a family of 3.

Bees buzzing in my bonnet